Bike Cambodia from the Angkor temples to Phnom Penh 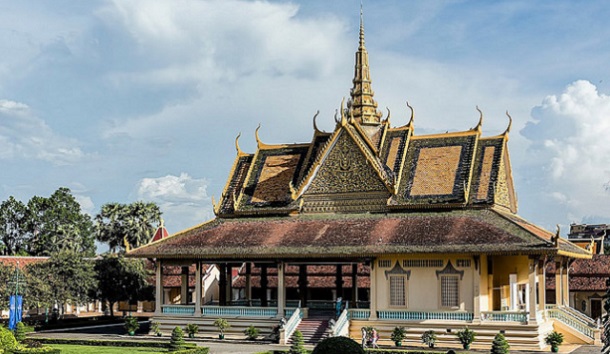 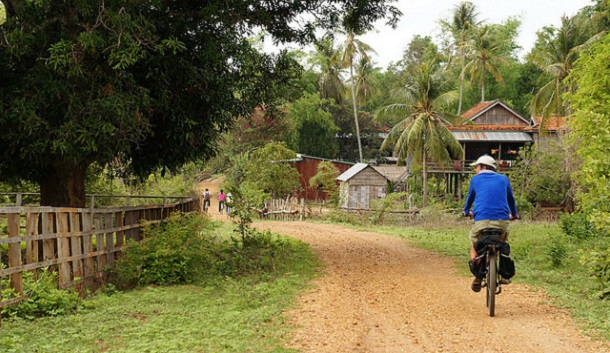 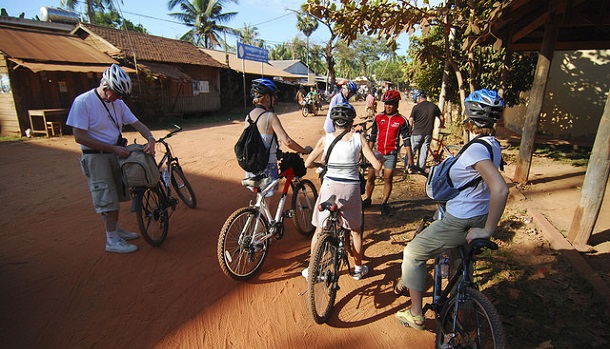 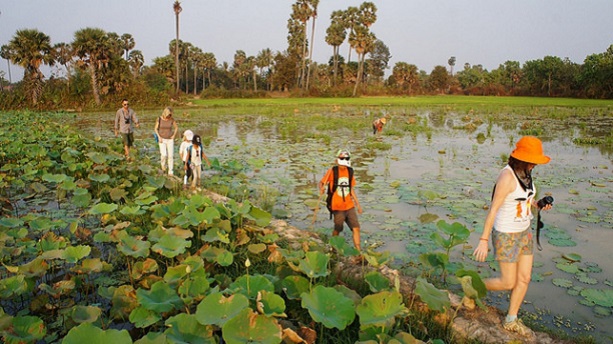 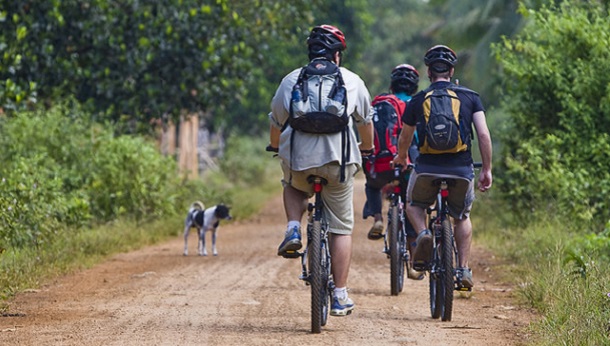 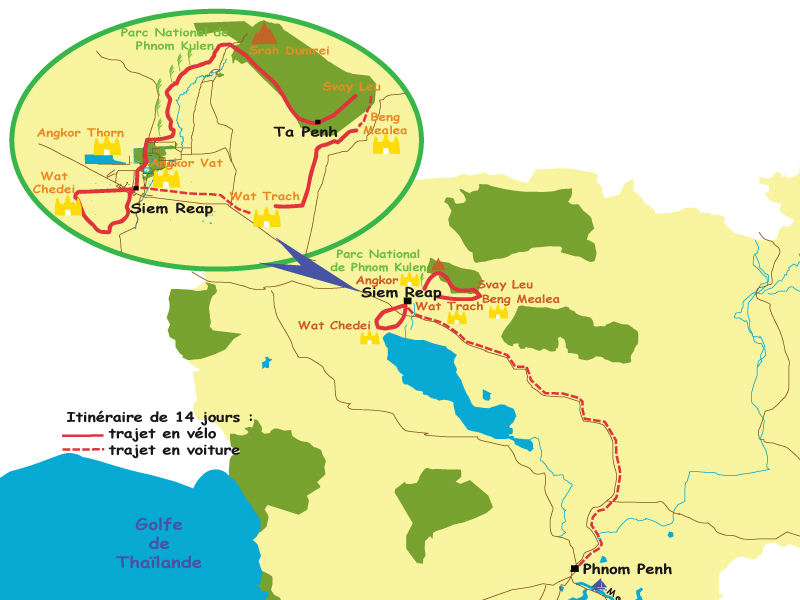 It will be visiting the huge Angkor city, travelling up and down the hills covered with rice fields or crossing the villages in the countryside, you will get under the spell of this generous and refined South-East Asiatic nature and of its people.
Marvel at the size and the details of the Angkor temples. Be dazzled by the light green of the fields and the numerous colors of the orchids, rhododendrons and other type of exotic flowers. Enter in the heart of Cambodia to appreciate its relax rhythm of life but also its mute grief after the Red Khmers atrocities. A concentrate of South-East Asia to be taken without moderation!
In Siem Reap and Phnom Penh you are staying in small boutique hotels.

You are also hosted by the inhabitants, which allows you to know more deeply the culture and the local population. You are accommodated in traditional Khmer houses in a dormitory. No private rooms / single rooms are available. We provide mattresses, 2 persons mosquito nets, pillow and blankets. Sheets and towels are not provided. 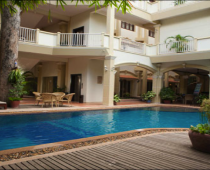 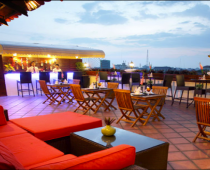 * Example of the type of accommodation

VTT bikes adjusted to your size. 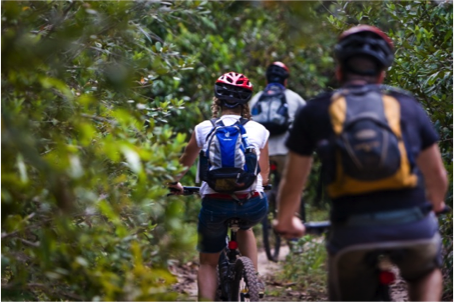 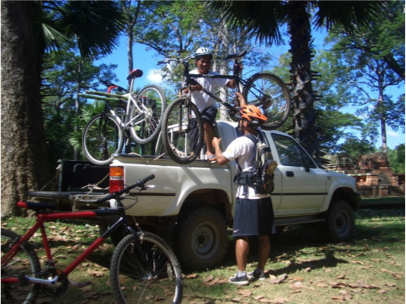 On this tour, you are followed all along trip by a car with driver which allows to adapt cycling distances depending on your wishes and the weather and to carry your luggage.
You are also accompanied by a cycling guide. The guides are English-speaking.

• As many Asian countries, Cambodia is a touristic destination dependent of its climate and different seasons (fresh, dry, wet).

• The best period for cyclists still remains the fresh season which spreads from mid-November to January. Indeed, the precipitations are limited and the humidity is bearable.

• From February, the temperature in Cambodia rises to reach its maximum in April-May (35°C), not very comfortable for biking tours.

• Don't leave during the wet season in Cambodia! Even if tourists are fewer, the period from June to October is marked by the rainy season (heavy and sudden rain) and high temperatures.

• Cambodia is one the South-East Asian countries bordered from one side to another by Thailand, Vietnam and Laos. The country has been during many years subjected to the Khmer Rouge leaders and the civil war. The economy in Cambodia has long been based on the rice growing and the textile industry and still remains like that nowadays. Today, the country experiences an economic boom thanks to the touristic development of the region.

• Conservative and traditional country, the most common religion in Cambodia is the Buddhism Theravada. Attracting the sovereigns of Angkor, this religion has been introduced in the territory during the XIIIth century after a long presence of the Hinduism religion. The religious hope to have a better life without pains thanks to priests and offerings.

• A visa is compulsory to go to Cambodia. A simple visa of tourism is necessary if you stay a maximum of 30 days in the country. The visa must be effective three months after the emission date. You can get it at the Embassy of your own country or by internet from the Cambodian Ministry of Foreign Affairs and International Cooperation (http://www.mfaic.gov.kh/default.aspx). Do not miss to consult the required documents to obtain the visa. You can also get it at the international airports of Cambodia (US$20).

• You must also have a passport effective six months after the return date for French, Belgian and Swiss people. Concerning the other nationalities, please ask for more information at the embassy of your country.

Your flight to Cambodia:

• The most suitable period to visit the country remains the fresh season, but it is also the most expensive one for international flights. Consequently, we advise you to book earlier your flight (we are not able to book the flight for you). The price ranges from 950€ to 1200€ (e.g.: flight with return Paris - Siem Reap and Phnom Penh - Paris).

• Cambodia has got two international airports: Phnom Penh and Siem Reap (situated near Angkor temples). To join Cambodia from Paris, the journey lasts between 10 and 15 hours of flight (including the time difference) with at least one correspondence in Asia in Guangzhou, Bangkok or Shanghai.

• Compulsory vaccines are not necessary for Europeans. Nevertheless, it is highly recommended for tourists to be vaccinated against typhoid, tetanus, pertussis and hepatitis A and B.

• Prevention measures against malaria are highly recommended if you are going to stay in rural areas during your holidays but are not necessary in the heart of the main touristic destinations.

• Cambodia is part of the Indochina time zone (ICT). Consequently, the local hour of the main neighbouring countries (Vietnam, Laos, Thailand) doesn't change. Nevertheless, the jet lag in relation to the Greenwich Meridian is 7 hours and 6 hours in summer in Europe. When it is midday in France, it is 5pm (in summer) or 6pm (in winter) in Phnom Penh.

• Khmer is the official language in Cambodia. Don't worry, English is usually used by the inhabitants. In fact, numerous translations are visible in the streets. As it was also an ancient French colony, French is officially the second language of the country (numerous ancient exiles are called the « Franco-Khmers »).

• The Cambodian Riel (KHR) is the official currency of the country. Nevertheless, most of the payments are made in USD (dollars). The payment by credit card (Visa, MasterCard) is more and more used in shops, hotels and restaurants.

• Depending on the regions, the quality of the water changes and is more and less vector of diseases. We highly misadvise you to drink tap water. You can easily buy bottles of water for less than 1$.

• The country has got an electrical system of 220 volts. French plugs as well as European ones can be easily adapted to Cambodian plugs. 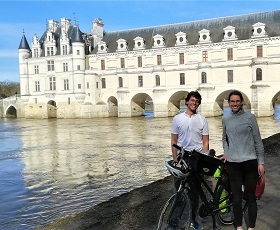 Cycling in the Loire Valley from Blois to Saumur 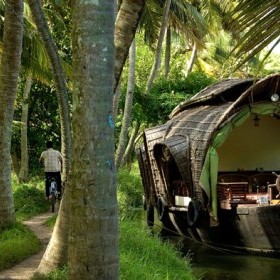 South India : Kerala by bike off the beaten track 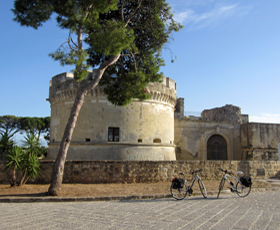 Cycling tour in Puglia from trulli to the sea
Top